Our first e-newsletter in Spring 2008 highlighted Aurora’s accomplishments during its first 10 years. Five years later, this article reflects on what we have achieved and what we still need to do.

By 2008, the end of Aurora’s first decade, RWIS had become a widely accepted and implemented technology, largely due to Aurora’s success in addressing major challenges like

In the five years since 2008, Aurora has continued to improve RWIS efficiency and its reach through projects like the development of computer-based training, mobile sensing, and integration of RWIS with maintenance decision support systems (MDSS).

Today, Aurora-supported RWIS innovations are making real differences: Roadway maintenance departments across the country and in member countries are working more efficiently and effectively. Streets and highways are safer. Individuals and organizations have better weather- and travel-related information, sooner. Bad weather is having fewer negative impacts on traveling, shipping, and other transportation-related aspects of our individual and related economies.

Looking to the Future

Leland “Lee” Smithson, coordinator of AASHTO’s Snow and Ice Pooled Fund Cooperative Program (SICOP), says the need for enhanced, automated, data-driven systems for guiding decision making will only increase in the future. He sees two arenas in particular in which Aurora can make major contributions.

“Algorithms that can quickly manipulate data and make accurate predictions,” he says, “can help replace some of the skills and experience we are losing.” Decision Support Systems that can be queried with “what if options” can assist the decision maker in optimizing operational strategy while simultaneously building an experience background.

Second, Smithson encourages Aurora to focus on projects that help realize the broad vision of MAP-21 (Moving Ahead for Progress in the 21st Century Act, Fall 2012). MAP-21 is this country’s first long-term highway authorization since 2005. It shifts the transportation community to performance-based investments that accomplish measurable target outcomes in areas such as safety, environmental sustainability, economic vitality, and others.

Data–specifically, technologies and systems that quickly and effectively collect, measure, integrate, and interpret data and communicate data-based information to a variety of audiences–are central to performance-based investments and measurable outcomes. With its leadership in managing roadway and weather-related data, Aurora is well positioned to work with other appropriate data-based programs in order to

Many Aurora members and projects are already moving in this direction. According to Heather McClintock, head of the Maintenance Standards Section in the Ontario Ministry of Transportation (MOT), “Several departments at the MOT share data needs.”

McClintock describes recent advancements in Ontario that help address data needs of planning, traffic management, enforcement, road maintenance, and/or other departments. For example, the MOT has

In addition, Ontario’s RWIS data transmissions system-wide have been switched from telephone lines/poles to wireless internet-based systems. Internet systems are smarter. They are also less susceptible to weather-related damage and are remotely rebootable, reducing “windshield time” for station maintenance personnel. The cost savings from this conversion alone have allowed Ontario to add 26 more stations.

Other Aurora members have similarly exciting advancements in the works. Collectively, we can continue to make a difference during the next five years.

Aurora is excited to welcome its newest member. The Kansas Department of Transportation (KDOT) joined Aurora at the October 2012 board meeting in Toronto. Ron Hall is KDOT’s representative on the board. Welcome, Ron!

Highlights of October 2012 Board Meeting in Toronto

After a personal welcome by the Honorable Bob Chiarelli, Toronto Minister of Transportation, the board discussed the following topics:

Outside the meeting room, our hosts treated the board to tours of Toronto’s Transportation Management Center and of the Canadian weather network/channel.

Friends of Aurora to Meet April 2–3 in Virginia 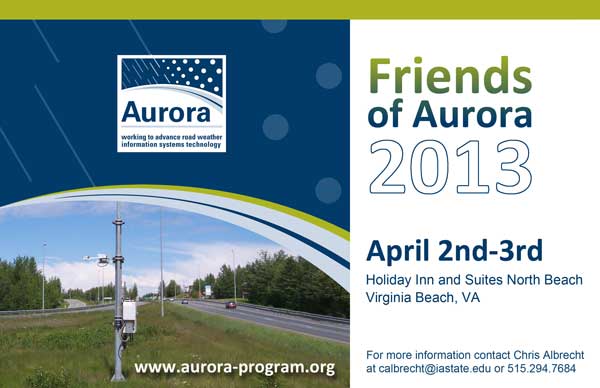 Aurora will host the 2013 Friends of Aurora event April 2–3, 2013, in Virginia Beach, Virginia, in conjunction with its board meeting. Friends of Aurora is an outreach initiative with private RWIS concerns to create a dialogue between public and private road weather communities.

For more information about the Friends of Aurora event, contact calbrech@iastate.edu at 515-294-7684.

Benchmarking the Performance of RWIS Forecasts

This project examined five categories of factors that may affect the accuracy of RWIS pavement temperature forecasts, then established and tested hypotheses using one year of RWIS observations and forecasts from several Canadian provinces. The RWIS networks were classified into three groups on the basis of regional climate: maritime, continental, or mixed. Results in the five factor categories were, in general, as follows:

Development and Demonstration of a Freezing Drizzle Algorithm for ESS

The primary goal of this project was to demonstrate the accuracy and utility of implementing a freezing drizzle detection algorithm in roadway environmental sensing systems (ESSs).

Although transportation agencies can perform preventive and reactive treatments to roadways, freezing drizzle can be difficult to forecast or even detect. Because weather radar and surface observation networks poorly observe these conditions, their detection requires special instrumentation and analysis.

Friends of Aurora Meeting (with the Board Meeting)

The Aurora Program is a Federal Highway Administration pooled fund program that brings together transportation agencies, universities, and weather services in the United States, Canada, and Europe with a passion for improving road weather information systems.

Aurora Members and Affiliates
Aurora membership is open to all transportation-related agencies. Members leverage a relatively modest membership fee to conduct large-scale RWIS-related research projects that, on their own, they may not have the resources to conduct. Aurora also has many affiliates from research universities and weather-related agencies. For more information on becoming an Aurora member or affiliate member, and for member contact information, see the join Aurora page.